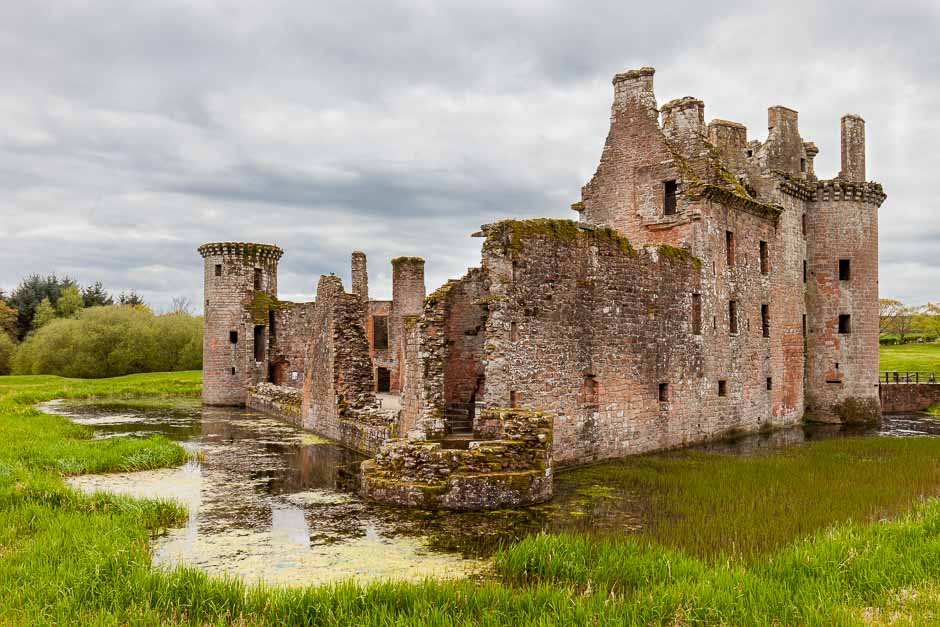 My first job before seeing Scotland was actually to get to Scotland. Up the A1, across the moors and then taking some back roads for the last 50 miles into Dumfries was a relatively uneventful journey, punctuated by the usual stops in petrol stations for cheese cobs, coffee and water.

I dropped in to Caerlaverock Castle which was about 30 miles before the B+B. It’s quite an impressive place. Built in 1295 to house Sir Herbert de Maxwell, it was completed just before the start of the Wars of Independence in 1296. In 1297, William Wallace famously won the battle of Stirling bridge, routing the English. By 1300, Kind Edward I of England led over 3000 soldiers and 87 Knights to the Castle and laid siege in an attempt to subdue Galloway. The fight was fierce but short and the Castle fell. However, on opening the gates, it was found that there were just 60 men inside Caerlaverock. Some were hanged from the walls, presumably for their insolence in defending against such overwhelming odds.

With a great ride through B roads across the border and then a final stretch of dual carriageway in the pouring rain, I landed at a B+B to the West of Dumfires, hauled my gear in and looked forward to settling down for the night. A lovely couple ran the B+B and they invited me to join them in the sitting room to chat. I must admit to always feeling awkward in situations like that – small talk is not my forte. 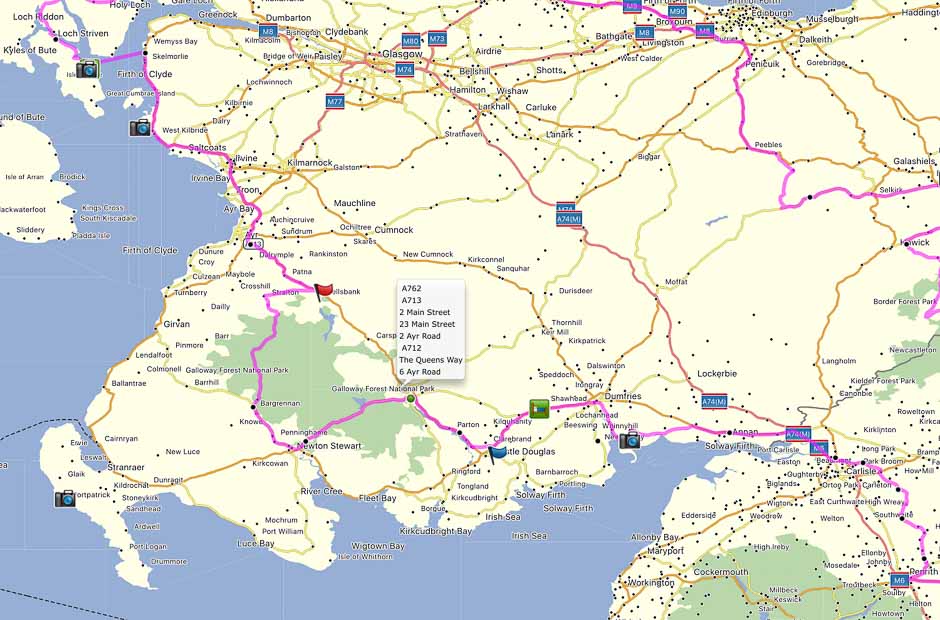 The clickety-clack of knitting needles, punctuated by the incessant dross of Eastenders and Casualty from the TV was a heady mix as I sat there nursing a cup of tea like an expectant father. As ever, the conversation turned to politics – an uncomfortable and soul draining proposition at the best of times. Much like being asked about the UK leaving the EU, I knew the referendum question was going to come. As the knitting needles clacked ever on, sirens screamed from the TV, the giant ex-para sat opposite me asked me about Scottish Independence in a thick accent.

That’s an awkward moment by any stretch especially when the previous 5 minutes had been a recount of how a band that had stayed there had been thrown out in the middle of the night because of their behaviour.

With my mind in overdrive I played out the four options. Firstly, I could say I think we should stick together but discounted this as I couldn’t work out which side of the fence he was on. Secondly, I could say Scotland should leave but again I’d no clue which way this house voted. Thirdly, I could say it’s up to the will of the Scottish people. A bland answer but ultimately only leading to splinters in my backside from the aforementioned fence. My fourth option was to outline the fact that it was irrelevant as we are all ultimately controlled by a group that runs the world from the shadows and keep the population busy by inventing votes and wars and threats to keep us all arguing over irrelevant stuff. I took a sip of tea, smiled and then shrugged. It turns out that they thought that leaving would be a disaster and then talked through all kinds of things such as farming subsidies and bizarrely, the issue of tractor MoT’s. 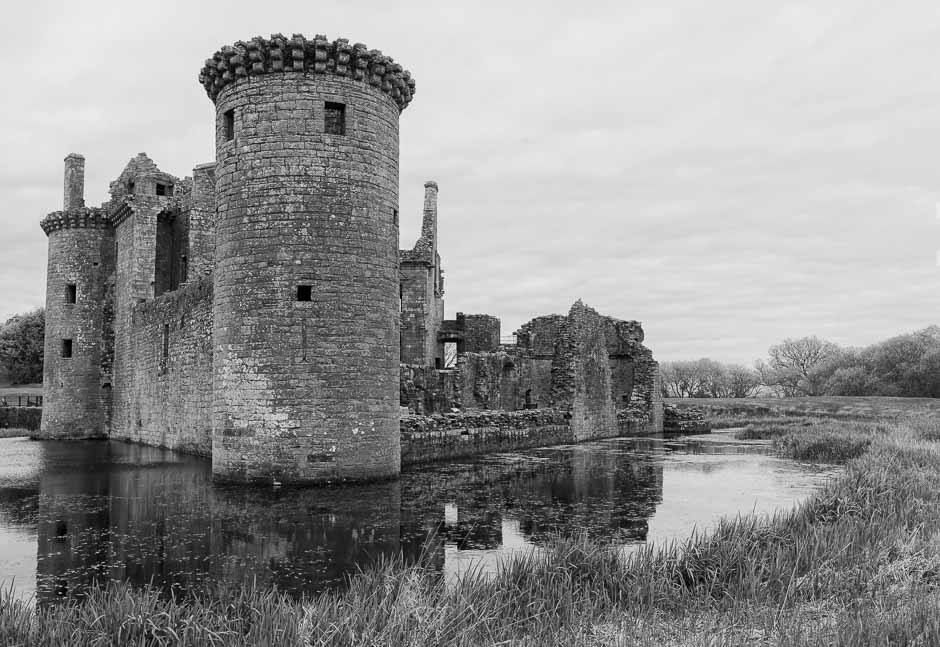 Wth a full Scottish breakfast (as someone in Ireland once told me, its got nothing to do with nationality, it’s just a ‘big feed’) I rode through the Galway national park, crossing it to the West before turning Northwards and hitting much poorer quality roads/tracks. The Galway forest park is quite barren, quite windy and a good ride – with rain and gravel on the roads it kept things interesting. Reminded me a little of the roads around the Norwegian/Swedish border.

Heading North out of the forest, the rain stopped and although I didn’t know it then, it would be the last time I would see rain until I returned to England in 10 days time. As you head North from the Galloway forest, you arrive at Portencross Castle. For me this was one of the stand out castles of the tour. Maintained by the local village and volunteers, it is an impressive single structure right on the shoreline. The original Poretncross castle was reputedly one of the last resting places of the royalty of Scotland as they were carried out by ferry to the isle of Iona. The present castle was built in around 1300 but was severely damaged in the 1700’s during violent storms which ripped the roof off. The view from the open roof is spectacular, affording stunning views of the coastline and islands.

I pushed on and took the ferry over to Bute would which would put me in a good position to do the Argyll Coastal tracks the following day. It’s a short ferry trip but the light was quite special on the journey and the winds were whipping up a swell and also smashing the flaps of my jacket into my throat. I had forgotten the basics of facing into the wind – keep your mouth closed. I didn’t, all the air was forced out of my lungs and I spent the next 10 seconds gasping for air. By the time we docked, the winds were really strong, making low speed control of the bike a little more tricky.

I pitched the tent, wandered down into the centre of Bute but found few places open and so retraced my steps, calling in at a golf club and sipped on a lemonade as I talked to the manager about how business was and, of course, the weather. With the winds picking up even more, I scurried back to camp,  cooked up some bean feast, had a brew and switched off the light.

With a sloping pitch for the tent and high winds, it was always going to be an uncomfortable night. Waking up because I had slid off the sleeping mat and was at the bottom of the tent or being woken because of the noise of the tent fabric as it flapped in the winds meant I only managed a few hours sleep. I gave up in the end, rammed the mat on an angle, shoved my gear under my knees and tried to make do. I was sat in the outdoor shelter at 5am, clutching a cup of tea and waiting for my porridge to come to the boil. The wind howled, my tent looked as though it was about to take off and the skies were grey with fast moving cloud.

As I stood there, burning my lips on the scalding hot porridge, I looked down to Bute and watched the water being illuminated by rays of light that had escaped the cold grey clutches of the sky. Windy, cold, tired and a long day of riding ahead to cover the Argyll coastal tracks. I smiled, realising that I wouldn’t want it any other way. Then that low familiar rumble from my tummy as I straddled the bike- 100 miles of forest tracks to go and last night’s bean feast was working its way through. I hoped it was a headwind.