Misty Green and Blue – The Dolomites and Alps part 1

“And if you hear me talking on the wind, you’ve got to understand we must remain…perfect strangers” 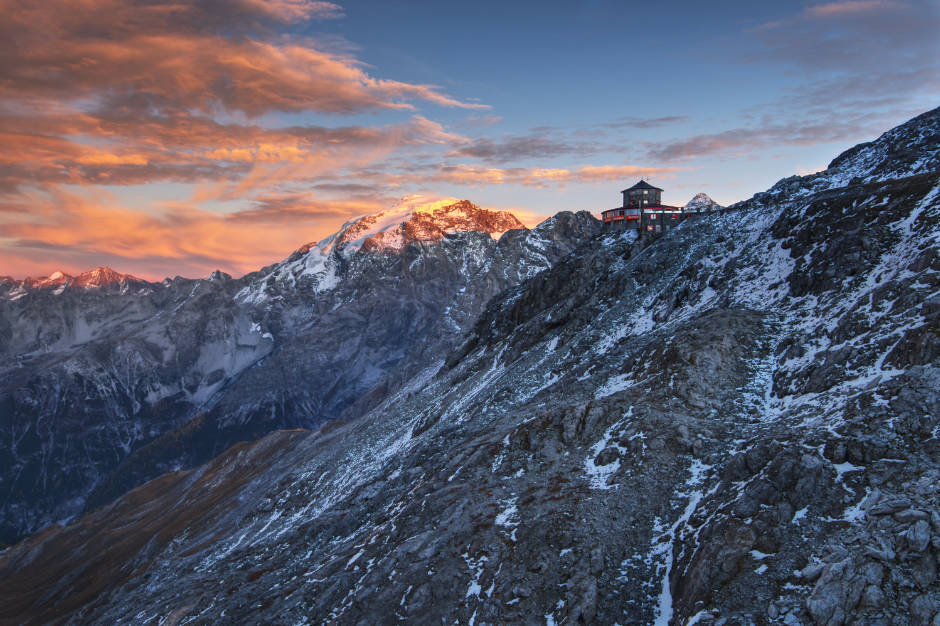 It was a late decision to head for the Dolomites – I think I booked the ferry from Harwich to the Hook of Holland about 2 weeks before I went. I’d considered Spain and Poland but I wanted a good blend of hiking, photography and biking. Didn’t take long to narrow it down to the Dolomites since I’d ridden through them briefly on my larger tour a few years ago. Time to head back and do it properly.

The problem I was going to face was that it was going to be out of season – good because fewer tourists, bad because various facilities (particularly the rifugios in the mountains) weren’t going to be open and there was a real chance of snowfall/harsh weather and sub zero temperatures. All of these were true on the trip. Landslides blocking passes, freak winds, icy mountain passes and few people. The Dolomites were truly spectacular – another testament to the sheer beauty of this world.

With a rough route plotted, to Holland, down through Germany, through Northern Austria and then into Italy before winding my way back on the Italian/Swiss/Austrian border into Southern Germany, through the Black Forest and then up to Wetzlar to visit the Leica factory before the ferry home 15 days later. The idea was to hammer the first day off the ferry and cross all of Holland and Germany – about 12 hours riding making full use of the de-restricted autobahn network.  Like most other things on the trip, it didn’t quite work out in practice like that. On balance, I think this soiree had some of the toughest riding i have ever had to do coupled with some weather conditions that were in equal measure awe-inspiring and frightening.

As with most of my blog posts, I try, with varying degrees of success, to put the content into some kind of theme. The Iceland blogs for instance were about the increasingly vicarious nature of humanity and were inspired in part by the Tool song ‘Vicarious’ (hence the lyrics ‘Angels in the Hearts of Men’) but in the main by the plight of the glaciers and the appalling conduct of some tourists as they fuel the vicarious culture through social media. Whether this either lands or resonates with people, I have no idea. I guess in many ways it doesn’t matter.

With this blog series we will be back to the biking, the hiking and the photography and the people I met. This post, in the main though will be about a person I didn’t meet and someone I met after the trip (in fact I only met them this morning) and will only cover my journey to the ferry at Harwich.

It was slightly more challenging to pack the panniers for this trip. After so many trips, I’ve got clothing and tools down to a minimum but I was having to pack hiking gear along with full photographic gear in a rucksack including a tripod. That is doable – what is more challenging is leaving enough space in panniers to put all your bike gear in when you get changed into hiking gear in the middle of nowhere. Just about managed to work out how to pack everything so that I could ride, then hike up to 15 miles in rain or sub zero conditions before setting up landscape shots. With a few tweaks on the first few days, it worked well in practice although on one occasion having to strip off hiking gear at minus 5 degrees wasn’t much fun – especially when I couldn’t get my bike gear back on because my hands were numb with cold!

In terms of packing, the ideal solution was to have all the camera gear in one pannier along with the tripod (who’s feet had to be removed every time because it didn’t quite fit which was annoying), left hand pannier was hiking boots and clothes, some food, tools. Unusually, I took the top box – empty, because I needed the storage space for my helmet when I was hiking.

The ride down to the ferry was uneventful – a few hours to get to Harwich and with clear roads I found myself there way ahead of time – this was exacerbated by the ferry boarding being delayed by 90 minutes. A lot of pacing and tyre kicking as the queue gradually lengthened with mainly caravans and campers. I was the only bike.

Through the checkpoint, to another queue. The ferry lines shining brightly in the darkness and casting long shadows on the boarding area, piercing the nicotine haze and exposing the huddled figures behind many of the vans. The wave from the man in the fluoro jacket, a swing of the leg and upwards we go, on to the boarding ramp and into the bike area. Lionel Richie bounced around my head as i checked the straps, checked the pannier locks and looked at an empty deck.

I said there were two people who inspired some of the commentary from the past. The first is Shawn who I met yesterday. Shawn is homeless and has been on the streets for 6 months after moving down from Scotland. I won’t relay all of his story but suffice to say that his sole aim for the coming weeks was to make enough money to buy a tent so that he wasn’t just sleeping out in the elements with just a sleeping bag. The deep dark bags under his eyes paid testament to that. I spoke to him having just eaten lunch and in the middle of a row of shops where well-heeled people brushed past with multiple designer bags of Christmas gifts and no doubt some treats for themselves.

The second person is someone I didn’t meet but he was on the ferry. As i opened the door from the stairwell on to the passenger cabin deck, all I could hear was screaming. Real screams, chilling. Ferry staff asked to see my cabin ticket, I shuffled my bag from one shoulder to another with care as I had my phone and iPad in there, my wallet and some paper maps with a route through the Dolomites. The attendant smiled, pointed down a corridor and said ‘that way sir’. Another scream, an anguished scream which threw me – I was trying to work out why no one was reacting to this – it was an adult and not a child screaming. I took a step forward, in completely the wrong direction as I had seen the sign for the restaurant and figured I would go and eat and then get to the cabin. Another attendant stepped in front ‘Sorry Sir, you need to go the other way at the moment’ as he pointed towards the stairwell. Another scream, anguished and pitiful – I asked him what was going on.

He explained that police were on board due to the fact that when they were coming into dock, truck drivers had noticed illegal immigrants underneath a lorry. They had scattered throughout the ship and most of them had been caught but at least one was refusing to hand themselves over to the police.

Here I am on an expensive bike, heading out on a holiday where I’ll be staying in hotels and there’s a guy on the streets hoping he can save enough for a tent in the coming weeks and there’s me on a ferry, carrying maps of my trip to Europe and working out which countries to route through to make it easy when there’s a human being screaming in anguish on the same ferry who wants to get across a single border.

Blog begins in earnest in the New Year, until then, whether you are in Canada, San Francisco, Bury,  Preston, Milwaukee, Tenerife, The Hague, Cumbernauld, Stoke, Belfast, Liverpool, Derby, Nottingham, Manchester or Bucharest,have a safe and warm Christmas