“Be happy in the moment. That is enough” – mother Teresa 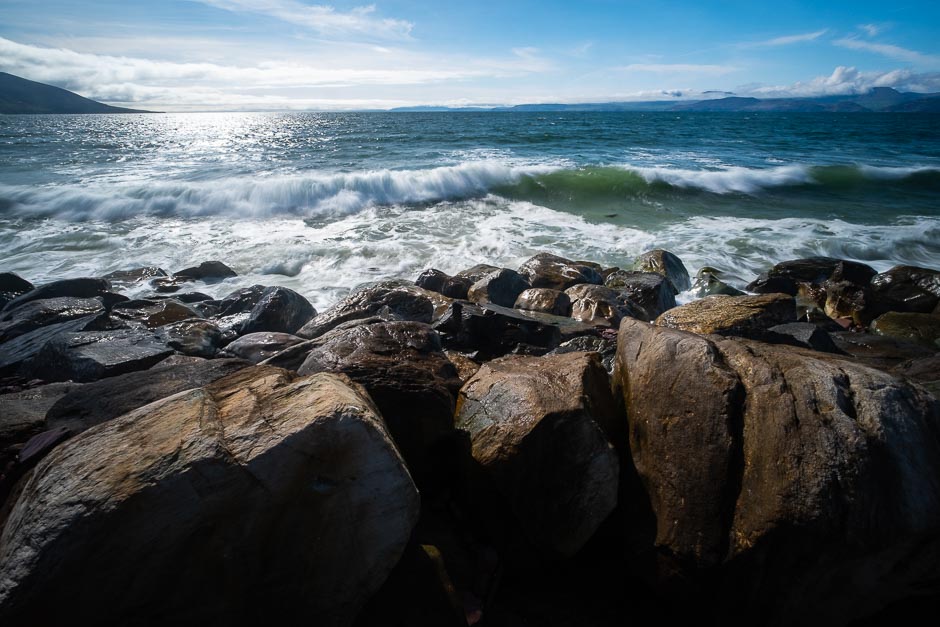 This shot is of Inch strand at the end of a long days riding around the Dingle. I’d pulled up, rolled onto the gravel, inadvertently hit the front brake, back wheel kicked out and then slid sideways before coming to  halt. I breathed a slight sigh of relief, the guy on the Harley nodded approvingly. I removed my helmet, nodded and set about unloading the camera gear.

The sheer force of the Atlantic is incredible. At Loop head the ground rumbles beneath you and you feel as though the waves will swallow the cliffs at any second. Even here, in the relative calm of the strand, where the force of the waves has been slightly dissipated because of the bay, there is still enough force to make you wary. With the tripod rammed into the rocks and various filters on the lens, there was no way of moving to avoid the occasional large waves.

With the sea breathing in and then exhaling wave after wave, it was a tricky job to time the remote shutter to catch the spray. I stood there, clicking away, reframing, looking back out to sea, moving the tripod. A couple of hours had gone by, the visitors car park had emptied and I was all alone on the strand. Lost in the sheer beauty and the ‘technical’ bits of the camera, everything had ceased to exist.

I do wonder whether this is what they mean by mindfulness – being in the moment and appreciating it for what it is. The more I think back, the more I find my happy space is sat on a mountain, hurtling along on the bike watching a vanishing point, being focussed on catching a moment in time from the camera. All of them are purely in the moment.

Maybe I’m reaching a state of higher consciousness, maybe I’m getting old, maybe I care a little less about ‘stuff’ each day. Maybe I’m being overly pretentious (yeah, I know, never been accused of that before…). I do wonder though how many of us truly know what those places are for us where we are just in the moment. I think I’m getting there. 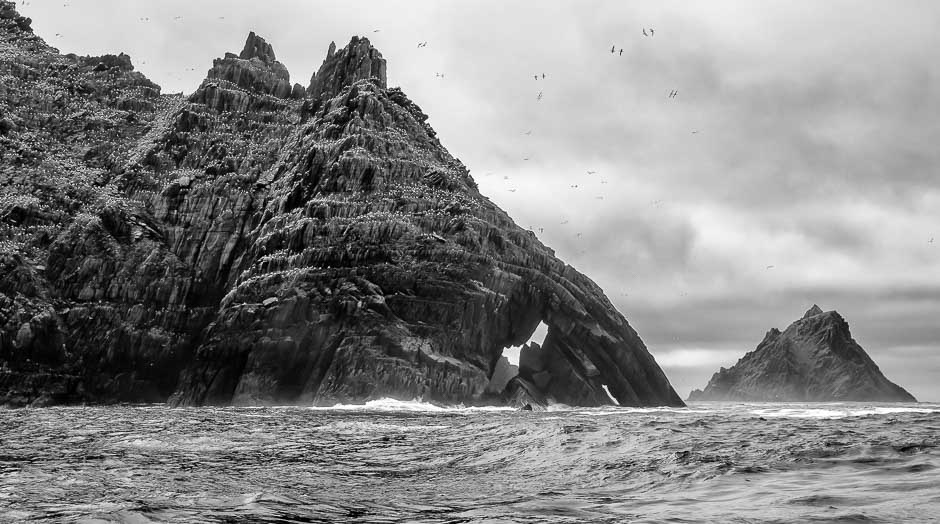 Focussing your mind and using your inner fire and personal strength to achieve an objective is what the management guru’s and personal coaches tell us. The law of attraction is a constant in the Universe they tell you – ‘will it…and it will be’….the Universe responds.

Yeah. Doesn’t work on a small boat in a heavy swell when you’re willing the Universe to keep the contents of your stomach where they should be.

Swaying sideways in the faux style of a teenager after downing 5 cans of super T and a bottle of Mad Dog, breathing slowly, gulping, eyes in a thousand year stare until I made the fatal mistake of closing my eyes. It was what has been described in my youthful drinking days as a casual vomit, a lean to the left, head over the side, right arm outstretched keeping my camera away from the spray and  then the awful dry retching. Looks like positive thinking and unleashing your inner fire doesn’t work in every circumstance, I feel slightly robbed…

My jacket sleeve had to take the brunt of mop up duties. Proper biker now. I noted the absence of carrots.

This of course is the Skelligs and the famous sea arch that I think is featured in Star Wars. No idea which film, I’ve only seen the first couple and that was a long time ago although I did used to enjoy the arcade game where you sat in the cockpit and did the trench run. Not sure that will allay the angst of the Star Wars fans. The sea arch of course is where the Jedi Han Solo defeated the evil Sith Lord Vuldermort. Could be wrong about that one to be fair, I’m sure a noble internet warrior will be along shortly.

They are a stunning and unique place – I don’t think I have seen anything even remotely similar on my travels. Well worth a trip – just don’t eat or drink before. I went on a calm day and as regular readers of the blog will know, I’ve been on lots of boats including the crossing to the Lofoten islands in heavy swell which isn’t for the faint of heart (or stomach)

My good deed here was to help the couple from Texas who were completely oblivious to the swell and whooping as we coached through every wave. I asked him about his camera and he waved it about as he talked enthusiastically about having just bought it and since he didn’t really know what he was doing, he just left it on the settings out of the box. ‘May I?’ I asked, stretching my hand forward and nodding slowly at the same time. With settings of f2.8 and 6400 ISO I don’t think he was going to get too many shots of anything other than pure white. With thumbs and fingers hurriedly searching for menu’s I changed the settings, took a test shot and handed it back to him. He thanked me but I think his eyes were his true camera, any shot that came out of his Canon would merely have been an unexpected bonus. As it should be of course and a refreshing change to be quite honest from the usual selfie madness that plagues this planet. 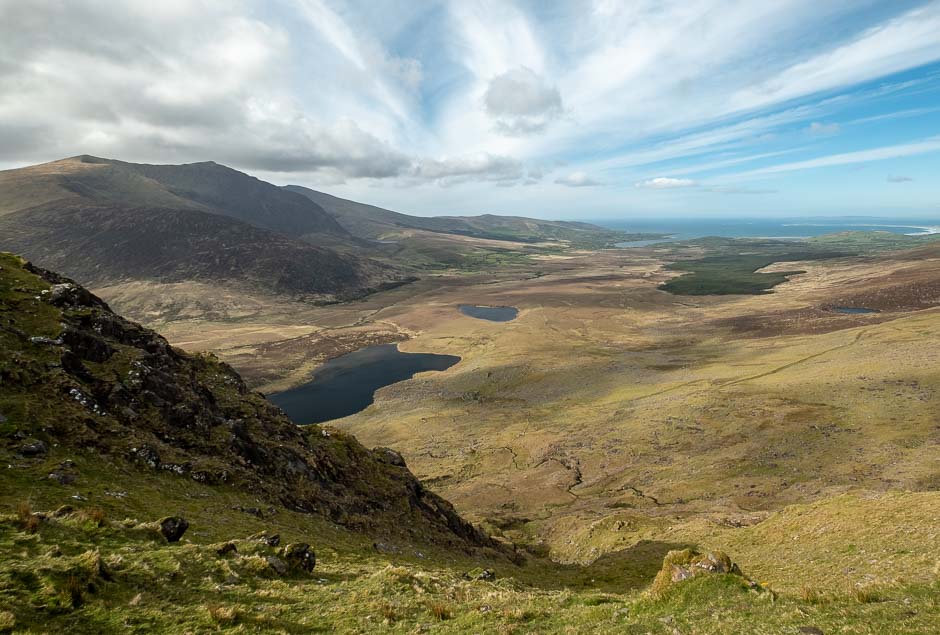 Is there a more inviting sight than the moment you turn the final corner and see the twisty ascent to the top of the Conor pass and there is no traffic ahead of you? A clear run of sweeping bends, perfect visibility and only the odd munching sheep to worry about. It’s as good coming down as it is going back up on the South Side and I usually wait patiently for traffic to disappear before shifting Honey Bunny into gear and hearing the satisfying crunch and pop of gravel spitting out from her back tyre.

The top of the Conor affords an amazing view to both the North and the South of the Dingle (the shot above is to the North). I waited an hour for this image, purely because the sky was overcast and gloomy with heavy cloud cover. As always though with Ireland, the clouds pass and the sun breaks through the Atlantic murk, affording glorious light where only moments prior there was murk.

The passes of the West Coast vary significantly in feel. The Ballighisheen is windswept and feels remote, the Healy has a sense of tranquility and the Conor is foreboding, almost breathtaking in its majesty. Ancient, humbling and slightly unnerving.

The shot above is of the Healy pass in the golden hour prior to sundown. I’d been riding all day and at the last minute decided not to head back to the tent and instead rode up the Healy to watch the sun go down. I had really only planned to take some shots and head back but I ended up stripping off the gear, sitting on the wall and just getting lost in it all. There is no real need to go over the Healy at that time if you’re a local and so I had it all to myself. The occasional chorus of birdsong and the odd muffled bark from the bottom of the valley were the only things to puncture the gentle whispers of the breeze.

As you sit there and the last shafts of light burst across the hills and the lake, there is an overwhelming sense of peace. Shoulders relax, air expels slowly from the lungs, eyes slowly follow the contours of the landscape like a glance stolen from a forbidden lover, the heart slows and in that moment, peace. Darkness begins its rapid advance across the valley and up the slope and in some kind of primordial reaction, you breathe again, your muscles stiffen and you come back to reality.

Sunsets and sunrises are magical times, they dull the senses and sharpen the emotions. . I always wonder if there is someone staring at their sunrise as I stare at my sunset, thinking the same, or perhaps (in a logical way) thinking the opposite. Maybe Mary really is in India

Someone once said that half the world is waiting for someone they can’t hold whilst the other half  is praying they’ll never be alone. It certainly seems like we alternate between those while going through life, I certainly do/have. One thing I do know though is that you think a lot about that on the side of a mountain at sunset and no matter whether those are sad or happy thoughts, the sunset washes it all away and leaves you ready for another day.