“You only live once, but if you do it right, once is enough” – Mae West 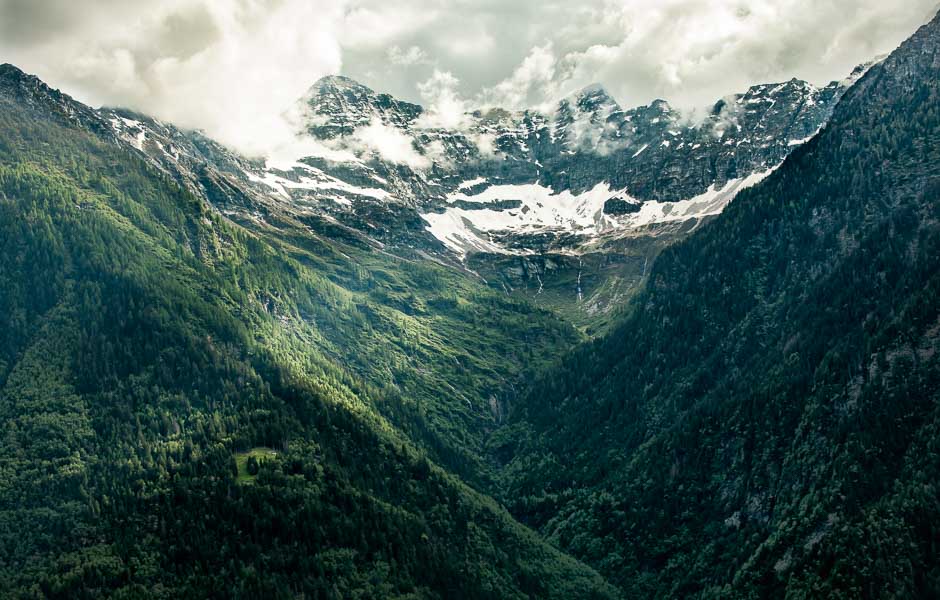 My plans were slightly in disarray due to the ferry delays from Palermo but with a quick bit of googling I saw that the passes were open now in Switzerland. A bit of a detour admittedly, riding North and then having to come back into Italy to pick up Venice. After docking at Genoa it was just an hours ride to a cheap B+B in the North of Italy – a handy jumping off point for Switzerland. Interestingly, Brexit was beginning to rear its head at this point and with an English owner of the B+B I was asked about home. I listened politely, made little comment and explained that I had no real clue what was going on with the campaigning. I didn’t really care either to be honest – being on top of a mountain looking at clouds tends to have that effect.

With some distance to travel to get into Switzerland the next morning, I stayed on major roads which were fast, easy and perfectly smooth tarmac. The only real items of note were the horrendous traffic North of Milan and then a humongous thunder storm just North of Lugano. The Alps came into view along the stretch of motorway after Lugano and with pitch black clouds, lightning that split the sky and rain that you could feel pounding your jacket, I pulled over as did most other people.

To say the service station was full would be an understatement but wow, what a service station. Over 2 levels it can only be described as a Selfridges food hall. All manner of cuisine from Thai to Italian to Chinese, all freshly prepared before you. Fresh coffee, baguettes made to order, waitress service. It took me a while to take it all in – I couldn’t believe this was just a motorway service station! With the rain continuing to pour and the road beginning to flood, I ordered a coffee and waited. It took over an hour for the storm to pass and the surface water to clear. 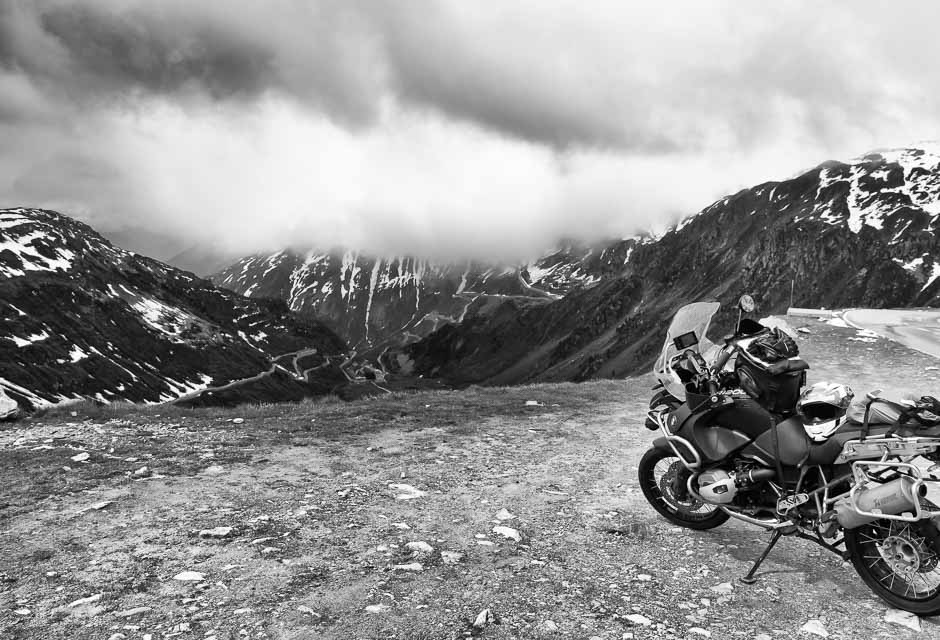 I’d booked accommodation at someones home in the mountains just short of the Furka/Grimsel/Susten pass. At the end of a long day it was a tough ride up with numerous nasty and very tight switchbacks. I usually enjoy those but it took all my concentration just to get round some of them. With an occasional foot down, a bit of self admonishment and loud tutting in my helmet I pulled up into the small village.

The view from the top and the welcome from the owner more than made up for the tricky roads. The cold, crisp and wonderfully fresh air and views from her home were a genuine shock to the system after hours of motorway grind. You will see many of the views from her home and village in this post. With my gear dumped in the accommodation area – an outbuilding with a number of single rooms with basic beds – I set off around the village as the sun was setting.

Everything was just….perfect. Every blade of grass seemed to be the same height, every view looked as though it had been freshly painted by a renaissance artist, every house immaculately maintained, air that you could feel as it entered your lungs, the low sound of babbling water from the stream that passed through the village. No noise other than the odd bird – not a noisy bird, a nice quiet well behaved bird. This would continue throughout my brief stay (and I would see similar on reaching Germany) and I must admit I found it odd and slightly surreal. After the grittiness of Sicily, the raw splendour of the Pyrenees and the accumulated muck, sweat and tears on my clothes, I felt like I had entered a country where I didn’t really belong. 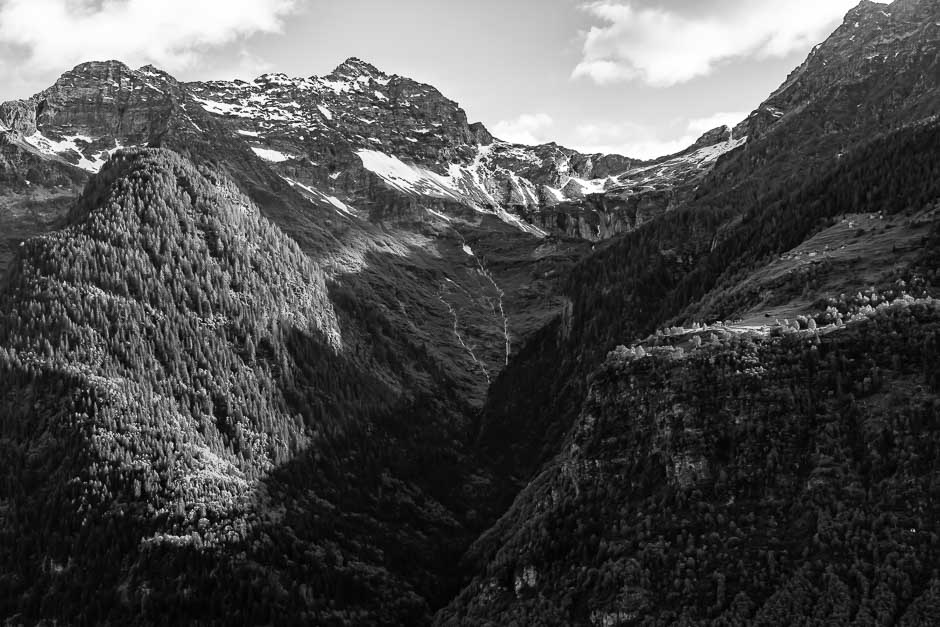 There were a number of people staying at the house, mainly walkers from Switzerland and Southern Germany – everyone seemed surprised as to how I had managed to find the place when it isn’t really advertised anywhere. I must admit, I couldn’t even remember how I had found it! With fresh pizza and beer, we sat back, watched the sun set and chatted about travel, bikes and the best places to see in the local area. It’s always a dichotomy when travelling, you want to talk to people about their lives and country but the situation is usually reversed because you end up telling them about your travels and country! I guess there is an appeal to a stranger in a strange land.

A bed for the night, South of the Susten Pass, iPhone

It was surprisingly cold that night. It shouldn’t have been a surprise given how high up I was but I remember hastily putting my thermals back on and pulling the blanket up to my chin with just moonlight for company. With a fresh breakfast made almost entirely of home grown honey, freshly baked bread, eggs from the chickens and local cheeses, I felt like I was a walk on in the Good Life. This isn’t meant as a derogatory comment – it is just amazing how ‘organic’ this place was. The owner was a wonderfully warm and kind hearted person and her living room and kitchen were adored with photos of her late husband and her children who had flown the next quite some time ago. Although the money for the lodging was no doubt welcomed, I imagine that wasn’t the main reason for inviting guests into her home and putting such care into the food.

I set off the next day to tackle a circular route which incorporated the Susten, Grimsel and Furka passes. With good weather, immaculate tarmac and a fast road I was soon on the approach to the Furka. Impressive views from below but as we climbed the fog moved in and visibility dropped to just a few feet. With fog lights on and visor down because of the mist, it was tricky going – no barriers in places and I was a few thousand feet up. With a sense of disappointment, I reached the summit and was met with nothing but cloud and mist. With any mountain you pay your money and you take your chance, it is a mountain after all…

I walked around for a few minutes, realised it wasn’t going to clear and clambered back on the bike. With the dash showing zero degrees, I pulled off into falling snow which stopped as soon I dropped back down the mountain. I knew that the Grimsel was only a few miles away and I wondered if today might be a waste of time if low cloud and snow were going to be over all the passes. My host had pre-warned me that visibility had been poor in the last week on the passes and with a prayer to any god that was listening, I started the ascent on the Grimsel. The Grimsel was clear, great visibility and even sunshine. It’s also a really enjoyable ride with the road snaking constantly upwards in a continuous set of 180 degree switchbacks. The bike made short work of those although it seemed a bit more tricky for those in cars.

I’d been told to visit the Grotto di Glace – a river canyon with waterfalls and high sided cliffs. With plenty of time to spare given that the passes had been much quicker than expected, I took a couple of hours out to walk it. It’s a pleasant walk but with narrow footbridges it does get log jammed with people coming the opposite way. A pleasant few hours and some nice waterfalls and lovely deep blue/green water. As you might tell from my use of words like ‘pleasant’ and ‘enjoyable ride’, I wasn’t really bonding with Switzerland.

From the Grotto, I headed straight for the Susten pass but this was also covered in heavy fog and at the summit there was heavy snow which made for a slippery (and very cold) descent. With rain at the bottom, I rode the Gotthard tunnel which is very warm – it runs for miles (9 to be precise) and boy is it hot in there – I was sweating by the half way point and opening the vents on my gear.

A relaxed evening with pizza, a lovely evening walk and a lot of thinking about what to do next. Should I head for the Stelvio pass? It would take a very long days ride and another day out of my itinerary or should I head back to Verona and then see Venice? It was a tough call but as I sat there nursing a beer in one hand and google maps in the other I remembered something that Mitch and Pete had said to me ‘If you like somewhere then stay, if you don’t then keep moving’. I packed the bike, slept well and was back across the Italian border early the next day and in Verona by late afternoon. Little did I realise I had arrived at the American front line but more on that in the next post.

I found it difficult to write this post. With so much stunning scenery on the trip and some tough roads and ascents in places like the Pyrenees and Southern Italy, it was inevitable that I was always going to be comparing any experience to those. Switzerland is a wonderfully beautiful place with very friendly people and perfect tarmac. For me however, it was just a bit too perfect and I missed the tougher riding and the grittier places. Norway and the Arctic circle were also now beginning to become more of a reality and my thoughts were slowly turning to them…