Europe Part 12 – The Road to Andorra

“We no longer live life. We consume it’ – Vicki Robin 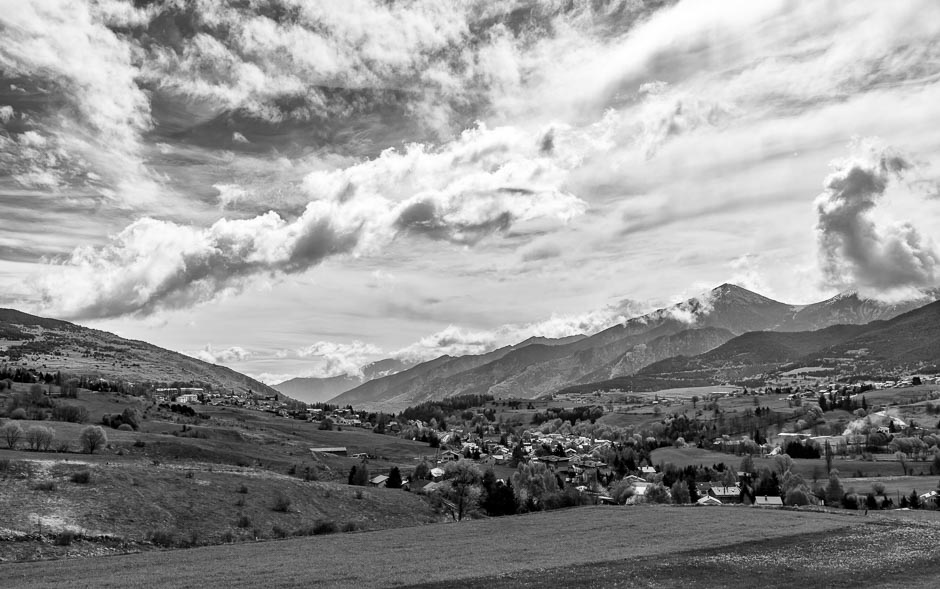 After the stunning day on the Cols I had a gentle ride around local villages and a few trails within a short ride of the hotel. A wonderfully relaxing day, taking in the scenery and the good weather – sun shining, cool mountain air and snow capped mountains. No need to do much other than take it all in.

A particularly amazing moment was riding through one village and having to stop as hundreds of goats and sheep filled the road. Sat there, sheep rubbing past my legs and a goat trying to chew my crash bars. Even more amazing was stopping to let half a dozen white horses go past me on another minor road as a young boy ran after them. Not sure if he was in control or not!

Packing the panniers that evening was a mix of emotions – I thought about extending my stay but with at least another 14,000 miles to go I wanted to preserve my time for when I needed it most. Who knew what might happen? The Arctic still seemed a long way off at this point as I straddled the seat, bid my farewells and made my way gingerly down the broken road leaving Tramcastilla. For now, however, I was focussed on riding the N260 and getting to Andorra. I had no real reason to go to Andorra – another country so why not? I could then make a decision as to whether to head back into Spain or go through into France and the Cote d’Azur. 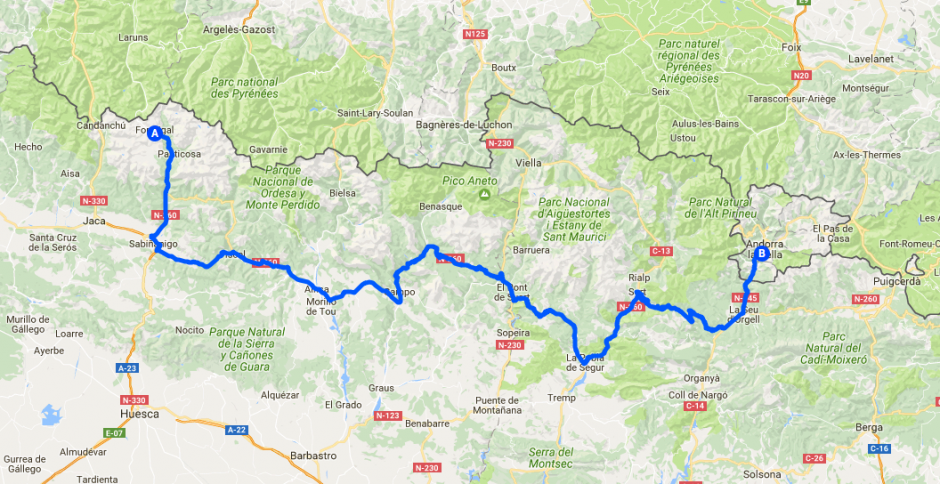 The N-260 is just a stunning and beautiful ride. At the end of the series of posts, I will list my favourite rides but if you’ve got a week or so then covering the Picos, Cols and riding down the N-260 is an amazing way to spend it – the scenery, the roads…just fantastic. In terms of the whole trip, these roads were only rivalled by Corsica – if Spain is heaven then Corsica is paradise but more on that in a few posts time!

Mountains to your left with their frosted caps glinting in the midday sun, great tarmac straight ahead round long sweeping bends where you can keep the throttle on and lean as much as you dare. Impossibly long straight sections to test the specs of your bike and feel the rush of fresh air under your visor…and the rush of air into your lungs as you ease off.

I don’t recall the wrong turn I took but it seemed like a good road to take and it led me into the foothills of the mountains – narrow roads climbing ever higher. Traffic began to thin out and the road became rougher with warning signs increasing in frequency – mainly risk of rockfall and ever slowing speed limits. To either side of me were cliffs and below me to the left was a small river weaving it’s way back the way I had come. I followed this road for a few miles, overtaking the odd car and enjoying the ever narrowing canyon. The road became wet with water falling from the cliffs and the road became narrow to the point of being practically single lane which made the numerous blind bends an experience. I rode this road for over an hour and eventually appeared back at a main road and wound my way back to the N-260 where I pulled in at a small village for a break. Nursing a coffee, water and churros, the silence was broken by the rumble of bikes – the unmistakable sound of Harley’s. 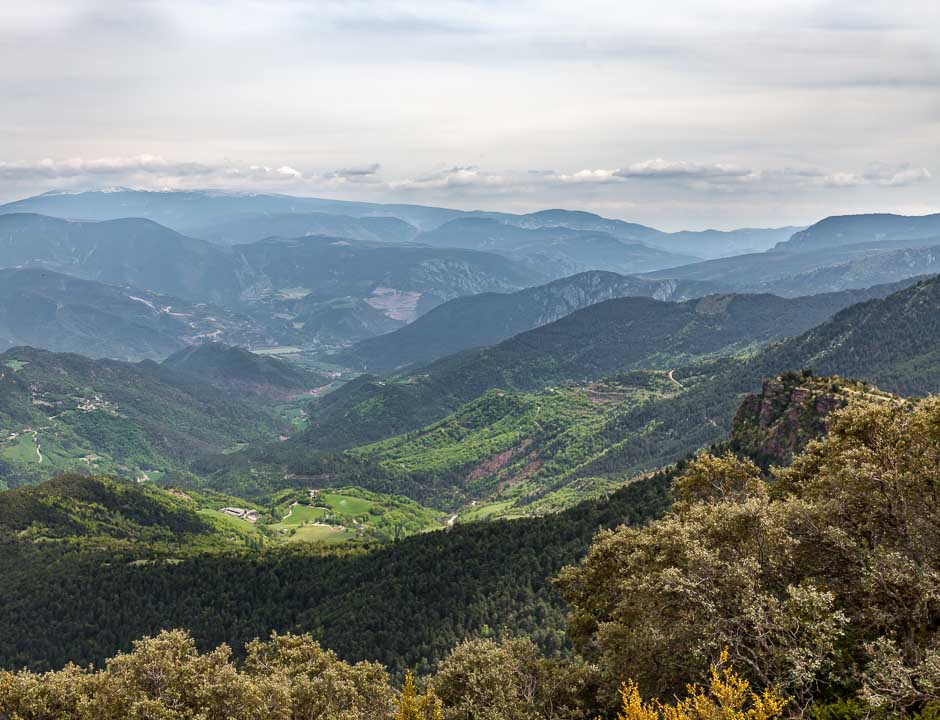 Enjoyable chat with the blokes riding them – a group from somewhere near London who had been for a Harley convention and were on the way back. Now, I quite like Harley’s if I’m honest (the look of some of them anyway) but this was an opportunity too good to pass up. I told them about my ride up and the amazing river canyon. They were pushed for time since they were trying to make the ferry but I said it could be done – they seemed interested. Map laid out on the table, lots of fingers pointing on the paper. There are those moments in life when the little devil appears on your shoulder and this was one of them. I casually mentioned that the river crossing hadn’t been too bad and I had avoided getting water in the intakes. Time appeared to stand still for a second, birds stopped chirruping and the sun went behind a cloud. I think I head header pipes corroding. I held it for as long as I could and then grinned, waved my hand in apology and then said its a bit rough but you can ride it no problems but the corners are very tight. I don’t think they rode that road…

Moving swiftly on the N-260, the traffic thinned until I had the road to myself. Ascending and descending through the foothills of the Pyrenees was a glorious experience. The sun had fully broken through, it was comfortably warm with a lovely breeze. I met a Spanish biker who was trying to get a shot of his bike on one of the panoramic views. Helped him out with the shot and chatted a little about the road to Andorra. He was there as it was one of his list of shots he wanted to get and had a day off work so was making the most of the weather. How wonderful to have that right on your doorstep!

There is a very long, very straight section of the N-260 as you approach Andorra. No junctions, straight as an arrow and perfect tarmac and a couple of miles long. Brisk pace I think it is called and towards the end of it I pulled in to a gravel area as my helmet cam had run out of battery life. Helmet cams are great but the battery life is shocking – eventually wired it directly into the battery in Corsica but more of that later. There I stood, hot, sweaty, happy but with a jammed battery in the camera. Now sticking a knife into a battery to remove it is not the most sensible of decisions but needs must when the devil scuba dives. Battery came out but in doing so I dropped the knife and broke the tip of the blade. It’s a testament to how sharp that knife is that it actually chipped part of the tarmac away.

Stickers are fun except when you have to take them off, iPhone

The ride into Andorra, through customs, is uneventful but is a big change from the solitude of the N-260. Lots and lots of bikes, loads of traffic and police all over the shop. I managed to get lost somehow and ended up on the main drag which was filled with traffic and pedestrians. A few weeks earlier that would have intimidated me but I felt comfortable rolling along at a few mph to get through it. A few left turns, a few stops to ask people where the street was I needed and I landed at the bed and breakfast. Parking was some distance away at the rear of the place and so it was all panniers off and lugging them one by one to the room. Chained the bike to the car port like structure, stood back and admired my handiwork. Anyone who wanted my bike would run the risk of having the entire structure collapse on them. Felt a bit stupid the following day when I walked into town and saw hundreds of bikes left all over the place with no security at all…

Andorra is an odd place. It is entirely made up of massive duty free shops – booze, electronics, tobacco, perfume, clothes. Hundreds and hundreds of them, one after another. A bit overwhelming. I spent a day there resting up, wandering the streets but there is little to report. If you want cheap stuff (including petrol) then it’s a great place to stop off. I bagged a pair of trainers and a cheap portable hard drive for the photos. I must admit, I have little else to say about the place – it is what it is. The surrounding mountains are of course stunning – it’s the pyrenees after all.

I had a choice to make in Andorra – ride to Barcelona or go for the South of France. Tough call as I liked the feel of  Barcelona. I decided in the end to go for the South of France, spent the evening looking for cheap accommodation and planned my route out of Andorra through the final portion of the Pyrenees. I did take the chance to use the ‘hydro spa’ on offer. A jacuzzi, steam room and blast shower. Never been in one before. Never will again. I thought it would be easy to operate a 3 button shower. There seemed to be 2 settings despite me trying to press 2 buttons at once, all three at the same time and one after another. The only setting I could find was having ice cold water blasted at 100 mph into the love spuds. Still not sure to this day if that is the design of the system or it was broken.

I will dedicate this post to the cheeky man himself, Mr L. One of his quotes was ‘The three basic food groups – beer, fags and chocolate’. Made me remember that when I was there.

no comments
Scroll to Top