Angels in the Hearts of Men – Iceland Part 2 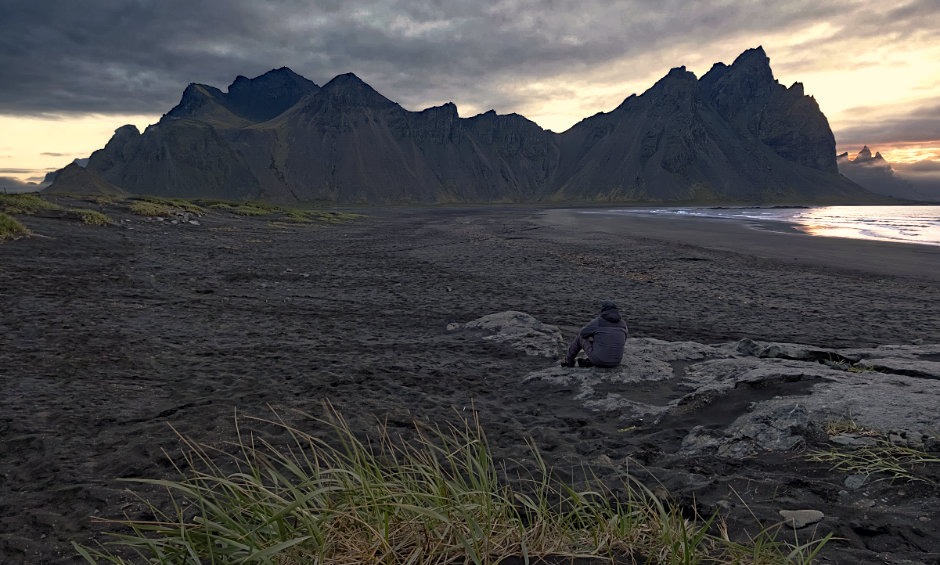 Stokksnes is a special place and was the main reason I wanted to visit Iceland. Situated on private land, accessed by a gravel track with the only company being a decommissioned NATO listening station. The photo above and the ones lower down show the place in all of its splendour. Ancient, magical, mystical. The backdrop no doubt providing some relief over the years for the NATO soldiers who’s sole role was to listen for the radar ping that would herald the final 4 minutes of civil-isation (sic) and our acceptance of legally permissible genocide. The elephant in the room forgot to remember what we said about the six million reasons to avoid peroxide politics.

Having arrived at lunchtime my heart sank as the horns were covered in thick cloud. Back in the camper, food, coffee and a 1000 yard stare to the horizon, waiting like an expectant father for any form of light or a break in the clouds. By 5 o’clock, I’d found where I wanted to shoot from, taken some sample compositions and again retreated to the sanctuary of the van which provided some relief from the cold wind blowing in from the sea.

The hours passed by, the clouds didn’t A choice had to be made, did I move on and chalk it up to a bad day or did I stay and camp overnight? I decided to be indecisive and give it another few hours. The cold began to gnaw and on went all the layers, every single zipper pull providing a level of scant relief given that the main problem was the damp of the sea air which was relentlessly removing all the heat from my body.

10pm. Although the sun never truly sets, the temperature does drop and the silence becomes absolute at around 10pm. It’s an eerie place to be – no sound other than the siren’s call of the sea and light that can only be described as a mix of dawn and dusk. That ever present feeling that something is behind you, watching you. It’s irrational but even though I played the role of the jealous lover, willing the clouds to stop their seduction of my mountains I occasionally did a 360, just to check that monsters weren’t behind me. I felt the same on the Western edge of Kerry, there’s always something that could be beyond the veil of the darkness or just behind the rocks. Ironically, its the monsters in plain sight that we need to be most afraid of.

12 midnight. Sitting in the front seat, watching my breath condense on the inside of the windscreen and staring to the horizon, the minutes slowly passed by. Bathing in the neon glow of a screen, I watched the clouds that were yet to be, moving slowly and relentlessly across the digitised Arctic Ocean. Looking upwards to heaven, I prayed for the clouds to depart figuring that divine intervention, statistically speaking, works 50% of the time in any given situation and there was little else I could do. Not sure which god i prayed to but there are a few hundred so I left the prayer generic to maximise my chances. 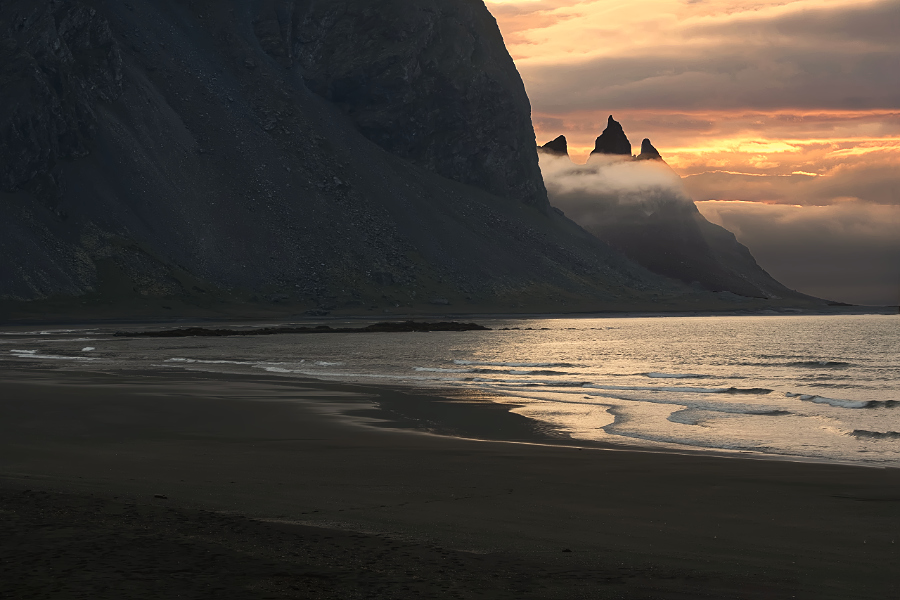 The hypnotic sway of the sea grass, fleetingly caressed by unseen lovers carried on the northern winds held my attention for some time. That point when you are tired, your body screams for the warming embrace of sleep, your eyes narrow and the world goes just slightly out of focus. Your brain begins to shut down and you become immobile, not moving, breathing slowly. You sink deeper into a zen like state, feeling at one with the Universe. Well, not really, I got most of the way to this contemplative state before an itch developed in the nether regions and I had to perform a rapid rearrangement of my boxers which is a Herculean task when you’re in the front seat of a van, half asleep and layered to the hilt.

The heat from the gas burner stove to prepare the mug of hot chocolate was welcomed before it was rapidly replaced by the cold, damp air.  However, as the last lingering mouthful was taken, the clouds were still there, thicker than before and stationary. A slow exhale turned into a sigh as I wiped the windscreen one more time, removing the dew of the previous hours of cloud gazing.

1am. Clouds still obscuring the peaks and no sight of vestrahorn as I sat motionless peering through the hands width, wet edged viewing portal in the windscreen. With golden hour set to begin in 30minutes, I looked back at the sleeping bag and then back out to the beach. Conditions for photography were no better than 10 hours prior. I looked back at the sleeping bag again, paused, took a deep breath and opened the door. I swung the backpack around my shoulders like a majorette, shuffled the load and tugged at the straps and pulled the hood tight around my face, rolling my head from side to side as the fabric caught on my beanie. A brief but firm nod to myself and my boots sunk into the deep volcanic sand as I headed back to the shore for one last throw of the dice.

Back into position, tripod set up, settings dialled in and I stood there, waiting. Everything set but no real light, complete cloud cover and no sign of the sun. 15 minutes to golden hour. As i kicked absently at an imaginary football and pirouetted around, the sounds of crunching sand came from behind. I didn’t get his name as he came to stand right next to me, asking politely if he could set up at the same spot. I nodded and offered a handshake. His head was a mess of bandages, obviously applied by himself given their ramshackle nature and covered in blood. A think stream of deep crimson was escaping from his brow and running down his cheek. I pointed to his head, he nodded, gently touched his head and explained that he had been photographing from the rocks and had slipped, smashing his head onto them. He returned to setting up his tripod, I paused for a moment thinking of asking him if he needed to go to get medical treatment. He’d been waiting all night in the damp and cold like me, I knew what the answer would be.

As he brought his eye level with his camera, I turned back to the mountain and in that split second, the sky went orange with the first rays of sunrise. All tiredness and cold vanished, the synapses fired, adrenaline surged and a singular focus overtook me.

The clouds lifted within moments and the vestrahorn became visible and he and I shot, moved, shot again and ran around the beach, each following our own rehearsed choreography. I hadn’t rehearsed being stood in the sea but the shot was too good to miss even though the salt water flooded my boots. Not quite as far out as I did in Ireland and certainly no one there to call me a mad fecker but it was far, far colder.

It lasted just under 10 minutes that golden glow before the clouds moved back in and the mountains were obscured. The Vestrahorn was visible for only 2-3 minutes. Just enough time but sadly I didn’t have time to do a selfie doing a v symbol. Shame, maybe next time.

Arriving back at the van, I took one last look back to the cloud covered mountain, smiled and looked skyward. Maybe someone was listening. 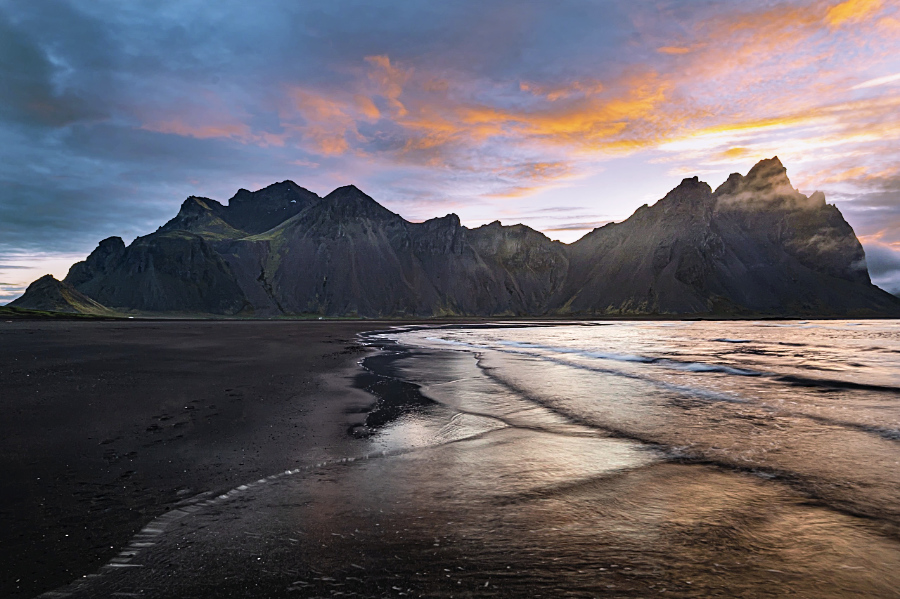 « Angels in the Hearts of Men – Iceland Prelude Wake up, Remember – Iceland Part 3 »